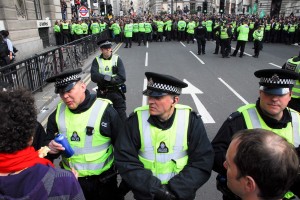 Remember the “Occupy” movement that swept across the nation in 2011? Bitter engagements between police officers and protestors over wealth imbalances in the United States set off a challenging and often angry debate over what should be done (if anything) to deal with persistent inequalities in our society. On many occasions, an Attorney has gotten involved.

More recently, clashes between police and protestors in New York and Ferguson, Missouri have touched off an equally divisive discussion over race and police tactics. These fights, tragically, have led to injuries and deaths, including the very recent point blank murders of two police offices in New York City.

Personal injury lawyers often file a slate of actions in the wake of this type of civic strife.

For instance, after being shot in the head with a beanbag by an officer, one Iraq War veteran won a $4.5 million judgment. His lawsuit argued that he nearly died and suffered from brain damage from the beanbag injury. His claim also included disturbing allegations; after being struck with the beanbag and lying motionless on the ground, the man allegedly sustained additional injuries as a result of exposure to a tear-gas container that police had thrown into the crowd.

Any Personal Injury Attorney who represents injured officers and protestors should understand how complex and politically charged these types of situations can become. Challenges abound: how do you unpack the objective truth in the face of conflicting evidence and witness statements? How do you assemble a jury willing and able to hear the case objectively? How can you prove the injuries caused by tear gas, flash-bangs, and rubber bullets stemmed from negligence, carelessness, or wrongdoing? What if the protestors who assaulted an officer were anonymous?

If you or someone you love suffered an injury during a conflict between law enforcement and protestors, explore your rights under California law by contacting the Injury Lawyer team at Vega Law at 415-287-6200 for a free consultation.